The Vicar Of Dibley returned on Monday night with the first of three special episodes inspired by lockdown.

However some viewers were left baffled after characters played by actors who have died since the show originally aired were mentioned by Dawn French’s Geraldine.

During the 10-minute short, the vicar was seen addressing beloved characters such as Owen Newitt, played by Roger Lloyd-Pack, and Frank Pickle [John Bluthal] even though they have passed away. 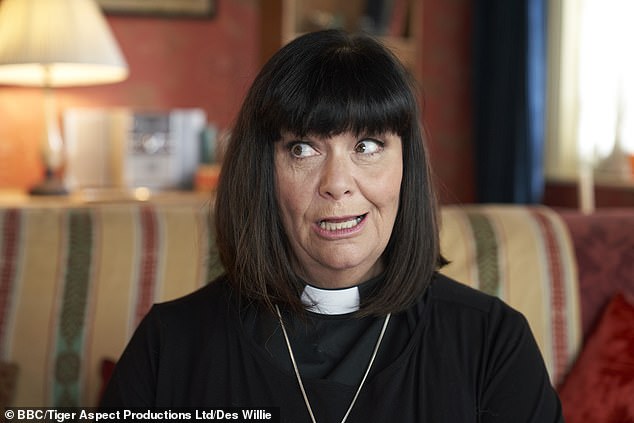 Divided option: The Vicar Of Dibley In Lockdown left some viewers baffled after characters played by actors who have died were mentioned by Dawn French’s Geraldine Granger

Actor Roger Lloyd Pack, who also starred in Only Fools and Horses, died at the age of 69 in 2014 while John Bluthal passed away in 2018 when he was 89.

Geraldine also kicked off the show with a shoutout to Jim Trott, played by Trevor Peacock, 89, however he has Alzheimer’s disease and is no longer acting.

Several fans took to Twitter to express their confusion over why these characters were being treated as if they were living in the special, with one asking: ‘Are they making jokes out of the dead ones?’

‘It’s so weird seeing this Vicar of Dibley thing given how much of the cast is dead, the show was the cast not just the vicar. Shouting at dead Frank is just odd’, added another viewer. 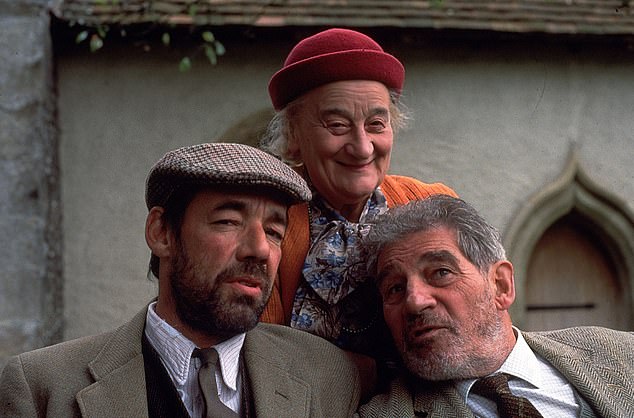 While someone else penned: ‘Watched Vicar of Dibley. Sad to think half the cast are dead now.’

However others were pleased with how the classic characters had been kept in the show, saying it was a lovely ‘nod to their memory’.

‘I think including the dearly departed, in their individual jokes and moments was a light comical nod to their memory, well played indeed,’ shared one fan.

And another said: ‘So great to see James Fleet back as Hugo Horton. Great stuff’ 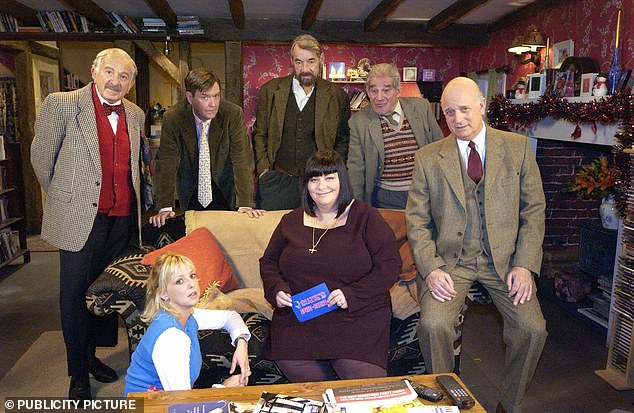 No longer with us: John Bluthal (far left) also died in 2018 when he was 89, while Emma Chambers (front left) who played Alice Tinker has also passed away since the show aired 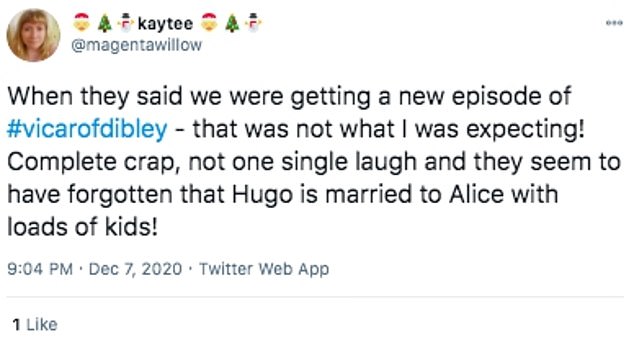 Reaction: Some were not impressed with the show acting as if the actors were still alive

Others said they loved the trip down memory lane, tweeting: ’20 seconds into new Vicar of Dibley in Lockdown and I’m crying with laughter!’

While another said: ‘I’ve got goosebumps already with the nostalgia feeling! The Vicar of Dibley In Lockdown. Dawn_French is one heck of a woman!’

The special saw Geraldine conduct her sermon over video and contained several entertaining nods to how the country has adapted over the pandemic.

Referencing technical challenges many have had with internet connections while working from home, the video broke up as Geraldine spoke meaning she told her listeners: ‘This is the end of the world.. I can promise you are going to catch this virus and die .. hope that’s put your minds at rest.’ 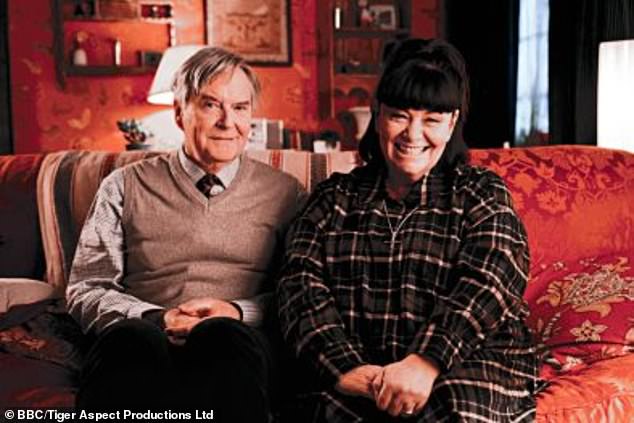 He’s back! James Fleet made an appearance as Hugo Horton in the reboot

Loving it: However many other fans enjoyed the shoutout to the dead stars, saying it was a nice way to honour their memory

She first spoke to Trevor’s character Jim telling him that 2m social distancing means ‘metres not miles’ and he’s been ‘hiding in the woods for a fortnight’.

As for Owen, the vicar started to read out a letter about a ‘young seductive frisky goat’ before realising it’s contents might be best to ‘deal with later’.

Frank’s mention came when the door bell would not stop ringing, with Geraldine shouting ‘Go away Frank!’ while finishing up the stream.

Elsewhere in the show she was seen with a disastrous hair style inflicted by Owen and also on a Zoom with school children. 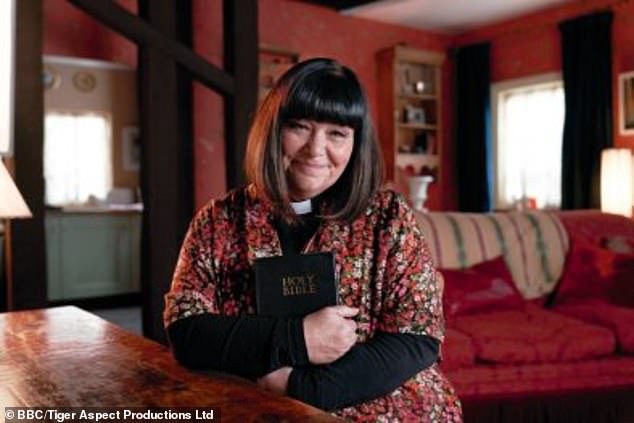 What a crazy time! Geraldine joked about reading, working out and getting awful haircuts during lockdown during the first episode

When one little girl announced that if she could bring people back from the dead like Jesus she’d do it all the time, Geraldine amusingly pretended that her screen had frozen in an attempt to fool the children and get out of answering.

Character Hugo Horton, played by James Edward Fleet, also made a cameo telling an exasperated Geraldine a story on video.

Ahead of the show airing on Monday, Dawn emotionally revealed that she had to film a tribute to late actress Emma Chambers seven times.

In the upcoming episodes, Dawn’s, 63, character Geraldine will pay homage to her best friend and the much-loved Alice Tinker in moving scenes. 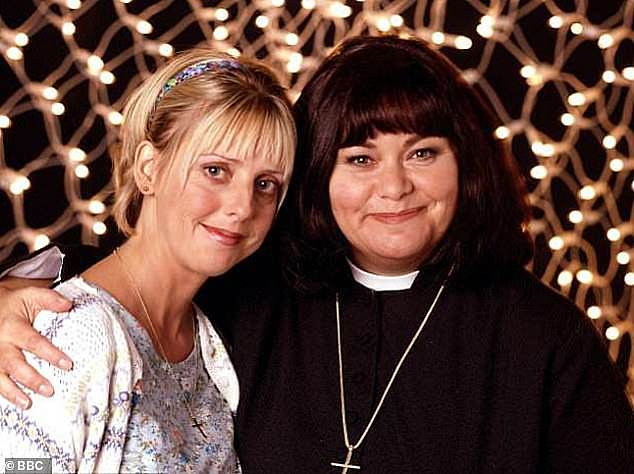 Heartbreaking: In the upcoming episodes, Geraldine will also pay homage to her best friend and the much-loved Alice Tinker in moving scenes

Emma, who starred in the sitcom for 13 years, died of natural causes, thought to be a heart attack in February 2018.

Talking about the upcoming tribute, Dawn said that she couldn’t get through the scene once without tears and that it took her seven times to film.

She told the Mirror that she still hasn’t been able to watch the emotional episode back, adding: ‘Along with all the silly, funny stuff, there is a moment where we pay tribute to Alice and that was not easy to film.

‘Honestly, I had to do it seven times. I didn’t get through it once without tears but it’s really important to remember this is where real life and Dibley come together.’

Dawn also praised The Vicar Of Dibley creators Richard Curtis and Paul Mayhew-Archer for being ‘truthful and honest’ while writing the reboot.

The show originally aired from 1994 to 1998, but the series returned for various specials before officially concluding in 2007. It has briefly headed back to screens for various shorts in aid of Comic Relief. 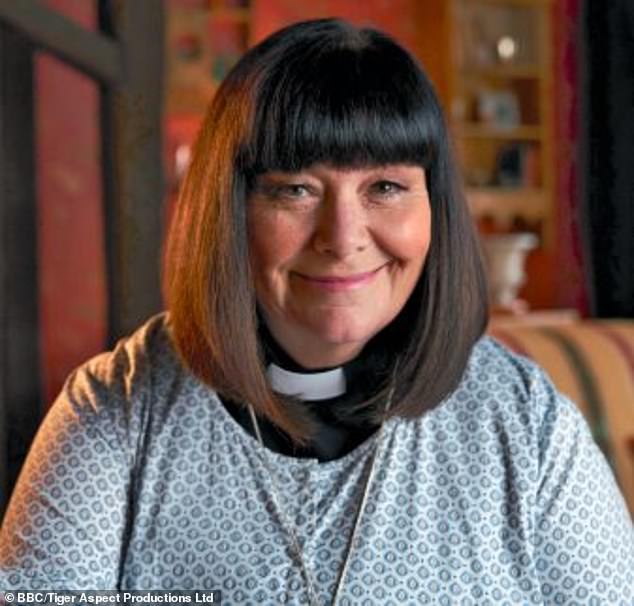 More to come: Another two shorts are set to air for the Vicar Of Dibley reboot