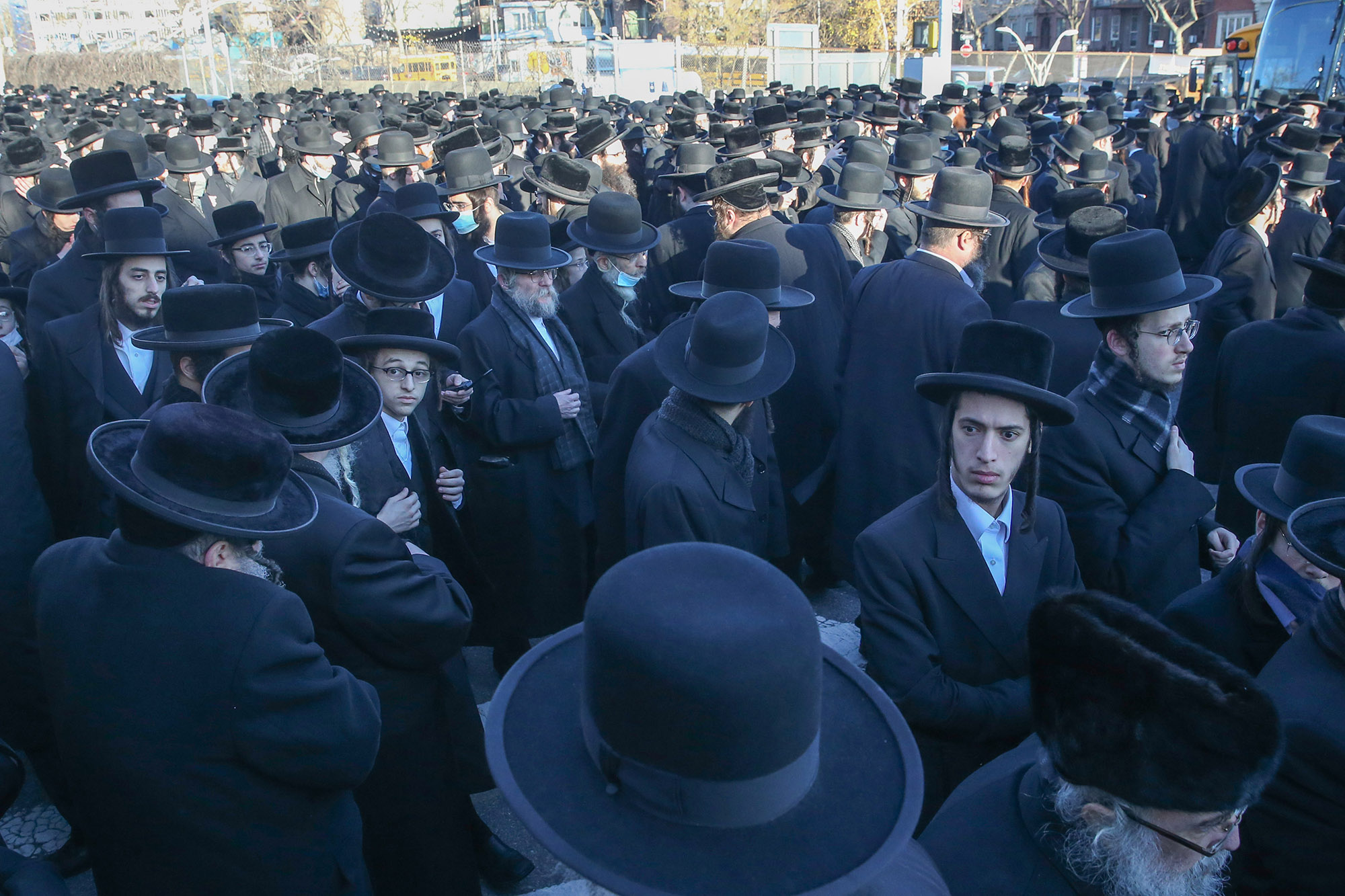 A Brooklyn synagogue that was stopped by the state before it could host a massive wedding in October finally succeeded on Monday in pulling off another potential super-spreader event — a jam-packed funeral.

The Congregation Yetev Lev D’Satmar went coronavirus rogue for the funeral of 94-year-old former chief Satmar judge Rabbi Yisroel Chaim Menashe Friedman — with up to an estimated 5,000 people cramming the house of worship at 152 Rodney St. in Williamsburg.

Bodies were pressed in on all sides and spilled out onto the sidewalk as just a fraction of the Hasidic crowd was seen wearing masks.

Five NYPD officers were seen standing nearby outside the house of worship — where a crowd of men and boys failed to socially distance, many also maskless or with their masks down around their necks.

“Normally, we would avoid having such a crowd unless it was for something very, very important. This was one of those times,’’ said an attendee whose first name is Lipa.

“This man was a giant,’’ he said of Friedman. “He was there from the beginning, when the community was rebuilding after the war. A very, very holy man. For someone like him, you couldn’t keep people from coming even if you wanted to.”

Another man at the service claimed that the community is immune to COVID-19 at this point — because virtually all of its members have already contracted it.

“Ask anybody here if they had COVID. They’ll say yes — and they won’t be lying,’’ the man said. “People from the outside, they don’t understand that. We’ve all had it.”

According to the CDC, even if a person has been infected and recovers from the virus, he or she may still be in danger of getting it again.

An organizer did announce in Yiddish just before the service that there were face masks available at the door, but hardly anyone donned masks inside.

Meanwhile, hours before the 12:30 p.m. funeral began, the synagogue held an event Sunday night — where maskless men packed around a dais as Grand Rabbi Zalman Leib Teitelbaum told them, “We are not Americans.”

The rabbi  was commemorating the annual anniversary of legendary Satmar leader Rabbi Joel Teitelbaum’s escape from the Nazis on Dec. 7, 1944, during the Holocaust.

“We need to understand that we are in exile. We live here, but we are not Americans,” the younger Teitelbaum said, according to the Jerusalem Post.

The synagogue is the same place where Teitelbaum’s grandchild was set to be wed in a ceremony with 10,000 attendees in October — before Gov. Andrew Cuomo’s office caught wind of the gathering and slapped a state order barring it from occurring.

New York currently allows “no more than 33% of the maximum occupancy for a particular area for [religious] services occurring indoors,’’ according to the state’s Web site. People who are not members of the same household must remain 6 feet apart.

A certificate of occupancy for the synagogue from the city Department of Buildings says it can hold 1,600 people max.

In November, Teitelbaum’s rabbi brother, Aaron, pulled off a secret wedding with thousands of attendees a few blocks from his sibling’s temple in Williamsburg.

At the time, Mayor Bill de Blasio called the event “amazingly irresponsible’’ and levied $15,000 in fines against the synagogue.