Loose Women‘s Andrea McLean has revealed that her biggest regret was not seeking out professional help sooner after battling a ‘nervous breakdown’ last year.

The Scottish TV presenter, 51, admitted that she wishes that she had gotten help ‘years ago’, after she found herself in a dark place and even contemplating suicide while struggling with her mental health.

When asked to name her biggest regret, she told The Sun: ‘That I took so long to get help. 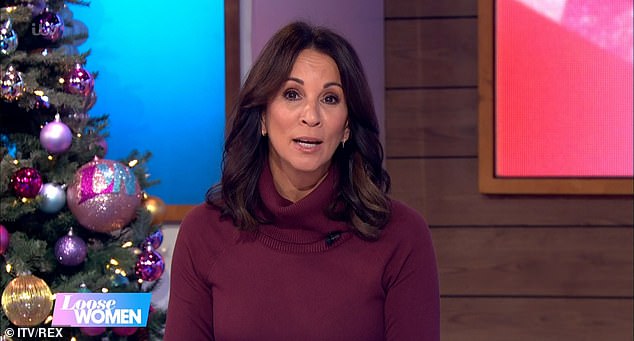 Regrets: Loose Women’s Andrea McLean has revealed that her biggest regret is not seeking out professional help sooner when battling with her mental health

‘I wish I’d done it years ago, but I believe everything happens when it’s supposed to. I don’t care so much about what people think now.’

Her revelation comes after she announced on Monday that she is leaving Loose Women at the end of the year, after appearing on the lunchtime show for 13 years.

Andrea explained the reason behind her departure was linked to her mental health struggles last year, as she revealed it made her question whether she was ‘living the way she wanted’.

Andrea explained: ‘Like so many people this has been a time to hugely reflect and think back. 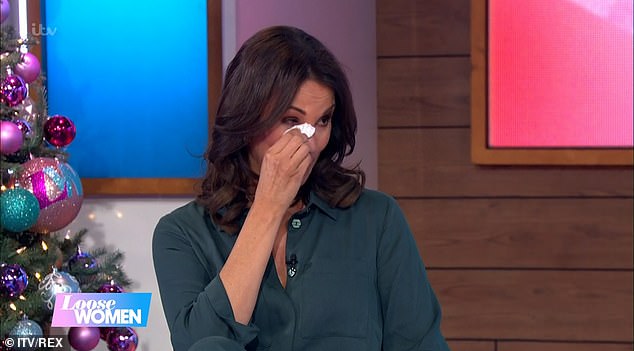 Mental health: The Scottish TV presenter, 51, admitted that she wishes that she had gotten help ‘years ago’, as she found herself in a dark place and even contemplating suicide

‘So many people have been talking about how they can’t wait for life to get back to normal. I, like many people, did that and thought, “Do I want my life to go back to the normal that it was before?”‘

She told viewers: ‘Last year I had a nervous breakdown and this year the world has had a breakdown.

‘This year I’ve been really mentally strong to deal with everything the pandemic has thrown at us.

‘You get one life, are you living it the way you want? Are you being brave? Are you doing the thing you want?

Becoming emotional, Andrea added: ‘I didn’t think I was going to cry. I’ve told you ladies just before we came on air. I’m going to be leaving Loose Women because I want to be brave…

‘All the incredible feedback that I had from my book and the support I was able to give them, I want to bring it to life. It was a really, really big decision to jump and see if I fall or if I fly.

‘And I just thought, I will never know unless I try, so I am saying goodbye to Loose Women.’

Linda Robson said: ‘I am going to miss you so much, Andrea. Honestly you have been amazing and a real good friend to me. When I was going through my depression and everything, you were the one that was ringing all the time to see that I was okay.’

Saira Khan added: ‘We are going to give you a massive send off so don’t you worry.’

Andrea said: This is not goodbye, it’s au revoir. I’ll still be here till Christmas.’ 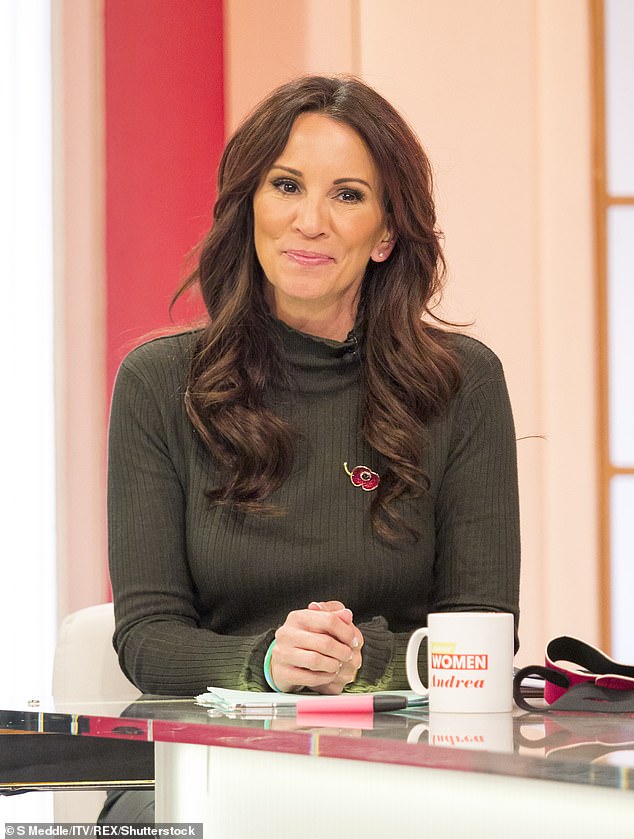 Goodbye! Her revelation comes after she announced on Monday that she is leaving Loose Women at the end of the year, after appearing on the lunchtime show for 13 years

Andrea said her decision was influenced by the ‘incredible feedback’ she received after releasing her book, This Girl Is on Fire, in September, which details her journey from trauma, toxic relationships and divorce towards empowerment and healing.

Andrea spoke about her spiralling depression in an extract of the book, which she previously shared with MailOnline in September.

She wrote: ‘At my lowest point, I was suicidal. This is the first time I’ve admitted that.

‘Just days after I’d collapsed on my make-up artist Donna, I had an argument with my husband, Nick, and then went away on a work trip.

‘It was a trivial thing, the kind of spat all couples have, and he’d only been mildly annoyed with me. 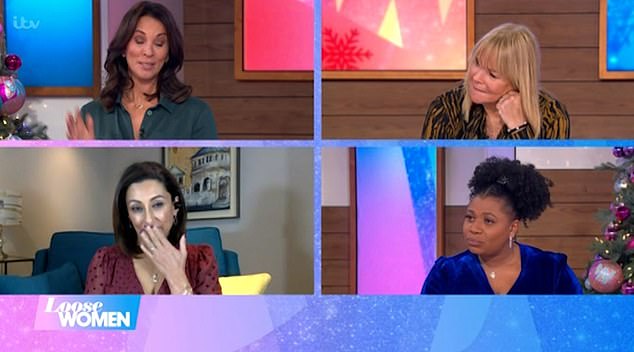 Battle: Andrea said the reason for her departure from Loose Women was linked to her ‘nervous breakdown’ last year, as it made her question whether she was ‘living the way she wanted’

‘But I was in such a bad state of mind that it triggered overwhelming anxiety and other negative emotions.

‘Alone in my hotel room, I wanted to end it all right then. I felt Nick couldn’t see my side of things at all — and if someone who loved me as much as he did failed to see it, what was the point?

‘And yet I couldn’t do it. I didn’t want to hurt my family — Nick, 47, my beloved third husband, and my two wonderful teenagers; 18-year-old Finlay from my first marriage and 13-year-old Amy from my second.

‘I thought they would be ashamed that I’d been so weak. I lay on the floor of my room and sobbed.

‘Then the next day I got up, went to work, put on a smile and knocked it out of the park at a meeting. No one would ever have known.’ 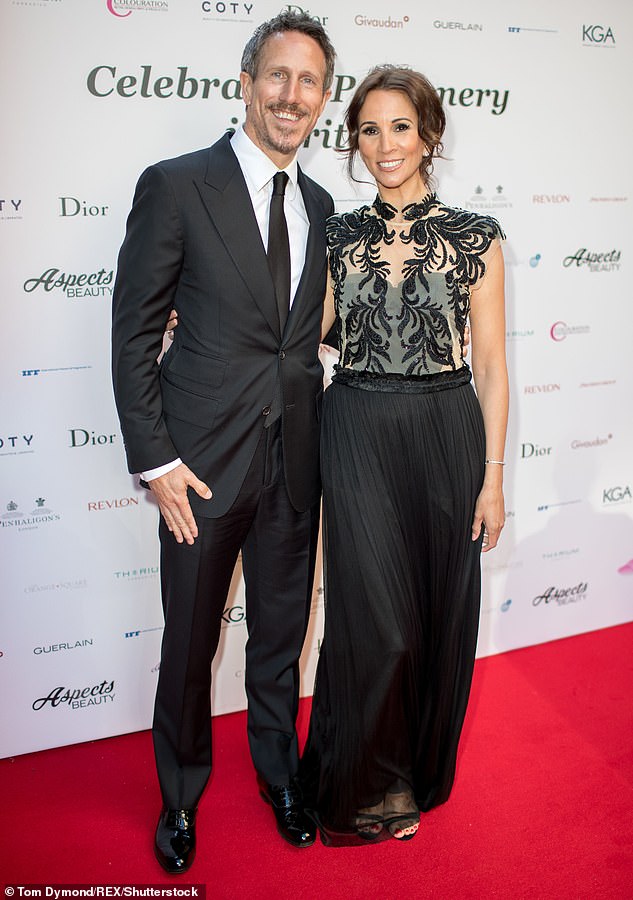 Supporting others: Andrea plans to help other women with The This Girl Is On Fire website, which she launched in 2018 with her husband Nick Feeney (pictured in May 2019)

The mother-of-two now plans to try and help other women and will be taking a risk with a new career path upon leaving her position on Loose Women.

Andrea launched The This Girl Is On Fire website with her husband Nick Feeney in 2018, following the success of her best-selling book, Confessions of a Menopausal Woman.

The Scottish native first began hosting Loose Women in 2007 but has been apart from the ITV Daytime team for the past 23 years.

Andrea currently co-anchors the show two to three days a week, while Ruth Langsford and Kaye Adams steer the ship in her absence.

For confidential support or advice call the Samaritans on 116 123 for free or visit www.samaritans.org