She suffered a devastating miscarriage 20 weeks into her pregnancy in September, and soon shared details of the heart-wrenching experience with her fans.

And Chrissy Teigen cut a sombre figure as she went grocery shopping with her mother Vilailuck at the Beverly Hills branch of Bristol Farms on Saturday.

The 35-year-old media personality kept things low-key, stepping out in an all-black ensemble that included a fluffy coat, leggings and Nike running shoes. 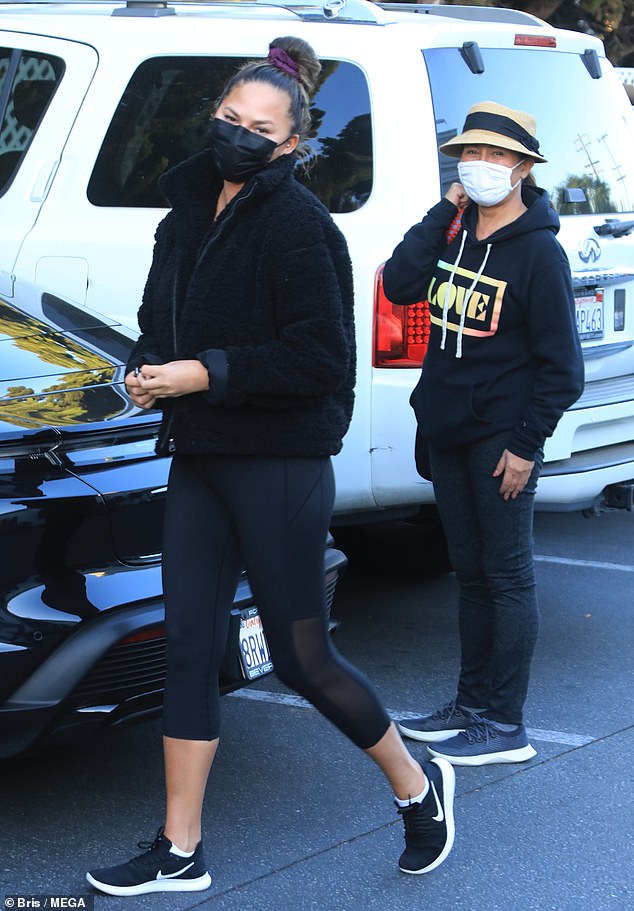 Outing: Chrissy Teigen cut a sombre figure as she went grocery shopping with her mother Vilailuck at the Beverly Hills branch of Bristol Farms on Saturday

Donning a protective face mask, the star wore her honey-tinged tresses in a topknot as she picked up some goods with her parent, also dressed in all-black.

Chrissy’s outing comes days after her husband John Legend publicly expressed admiration for how she publicly shared her experience with baby loss.

The model suffered a devastating miscarriage 20 weeks into her pregnancy in September, and shared heart-wrenching black and white images of herself in hospital moments after they lost their baby son, Jack.

All Of Me singer John, 41, told the Times T2 magazine that he admires his wife even more now because of the bravery she showed in her decision, despite feeling ‘nervous’ to take the images at the time. 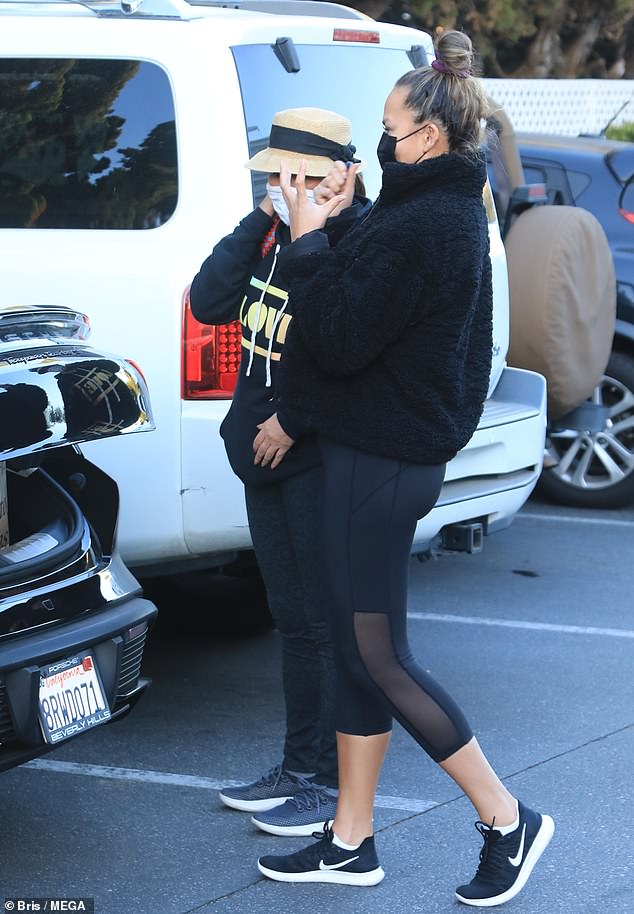 Chrissy later revealed she asked John to take the ‘uncomfortable’ pictures because she ‘needed to know the moment forever’ and admitted she knew that he ‘hated doing it’.

Speaking to the publication, John said: ‘I was nervous when we were taking pictures in the hospital because emotionally I didn’t know if I could handle looking at them.

‘But I really do believe that it was good for Chrissy to share her story with people.’

John took some of the images shared in their social media posts, one of which shows Chrissy sobbing while sitting in her hospital bed. While another captures the devastated spouses cradling their baby’s body. 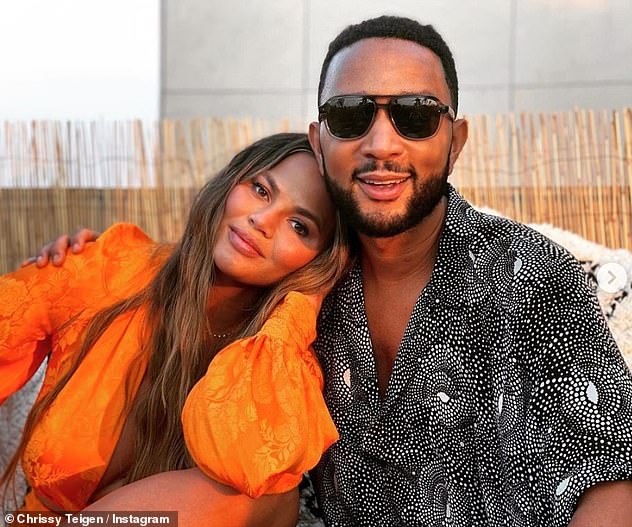 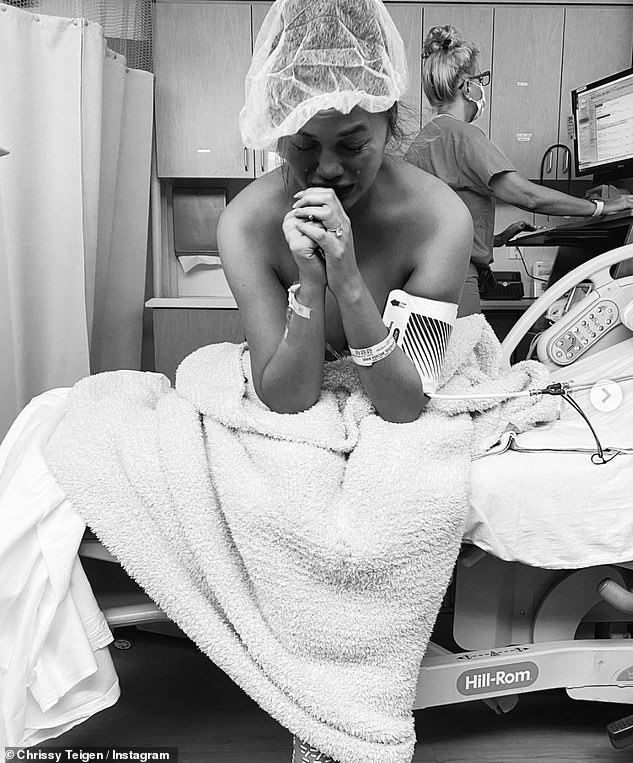 Heartbreaking: Chrissy, 35, suffered a devastating miscarriage in September, and soon shared heart-wrenching images of herself in hospital moments after they lost their baby son, Jack

John revealed that since Chrissy shared their experience they have received an overwhelming reaction from people who have been through the same thing.

He said: ‘Her being willing to share has opened up the conversation and made people feel they are not alone. It made me admire her even more because of the bravery she showed.’

John also admitted that it serves as a reminder that although the family appear to lead the ‘perfect’ life, they are very much human and experience loss and tragedy. 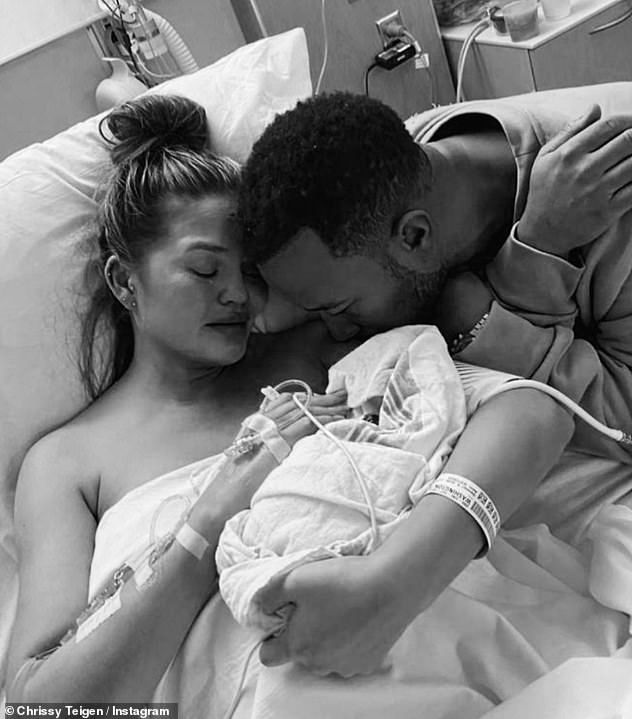 Pics: John, 41, told the Times T2 magazine that he admires his wife even more now because of the bravery she showed in her decision, despite feeling ‘nervous’ to take the images at the time

At the time, Chrissy posted alongside the images taken by John: ‘We are shocked and in the kind of deep pain you only hear about, the kind of pain we’ve never felt before. We were never able to stop the bleeding and give our baby the fluids he needed, despite bags and bags of blood transfusions. It just wasn’t enough.

‘We never decide on our babies’ names until the last possible moment after they’re born, just before we leave the hospital. But we, for some reason, had started to call this little guy in my belly Jack. So he will always be Jack to us. Jack worked so hard to be a part of our little family, and he will be, forever.

‘To our Jack – I’m so sorry that the first few moments of your life were met with so many complications, that we couldn’t give you the home you needed to survive. We will always love you.

‘Thank you to everyone who has been sending us positive energy, thoughts and prayers. We feel all of your love and truly appreciate you. 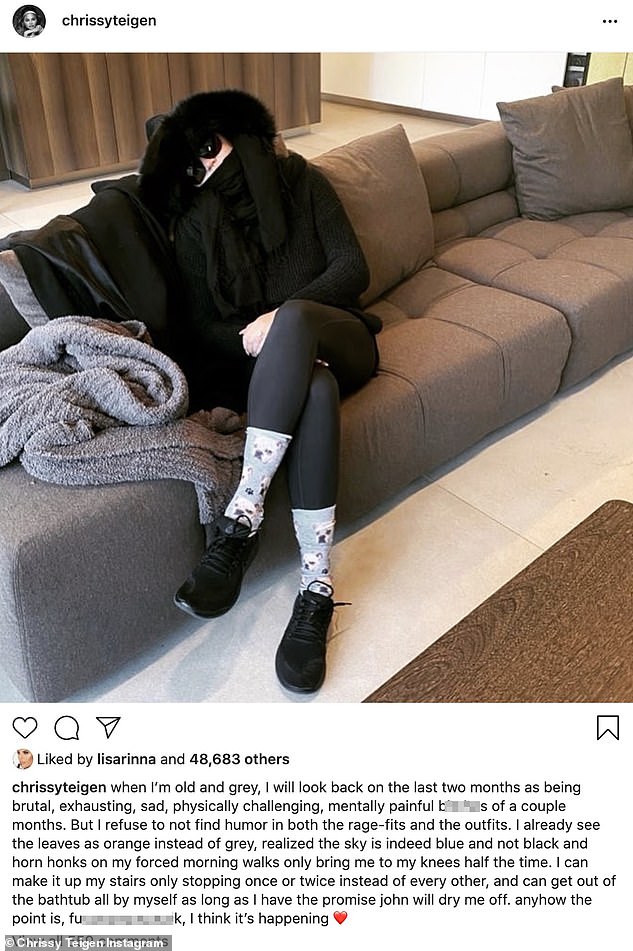 Healing: Chrissy said she is pushing through emotional and physical pain as she begins to heal

‘We are so grateful for the life we have, for our wonderful babies Luna and Miles, for all the amazing things we’ve been able to experience. But everyday can’t be full of sunshine. On this darkest of days, we will grieve, we will cry our eyes out. But we will hug and love each other harder and get through it.’

Chrissy recently revealed that said she is pushing through emotional and physical pain as she begins to heal.

The model has been open about her heartbreak following the loss of her son Jack, and she updated her 32.2 million followers about slowly getting back on her feet.

‘When I’m old and grey, I will look back on the last two months as being brutal, exhausting, sad, physically challenging, mentally painful b**ches of a couple months,’ she captioned an Instagram shot of herself bundled up at home.

Nodding to her funny blue dog socks, furry black cloak and choice to wear shades inside, she joked will always ‘find humor in both the rage-fits and the outfits.’

On a more serious note, the best-selling cookbook author described how her grief had distorted her perception of the world and ability to perform everyday activities.

‘I already see the leaves as orange instead of grey, realized the sky is indeed blue and not black,’ she noted. ‘And horn honks on my forced morning walks only bring me to my knees half the time.’

She continued: ‘I can make it up my stairs only stopping once or twice instead of every other, and can get out of the bathtub all by myself as long as I have the promise john will dry me off.’

In conclusion, Chrissy wrote: ‘I think it’s happening,’ in reference to finding her way toward healing.

Her post came just days after she and her husband spoke about their decision to share intimate and the images of their miscarriage.

Before the couple lost their unborn baby boy the writer suffered a month of bleeding as a result of a weak placenta. 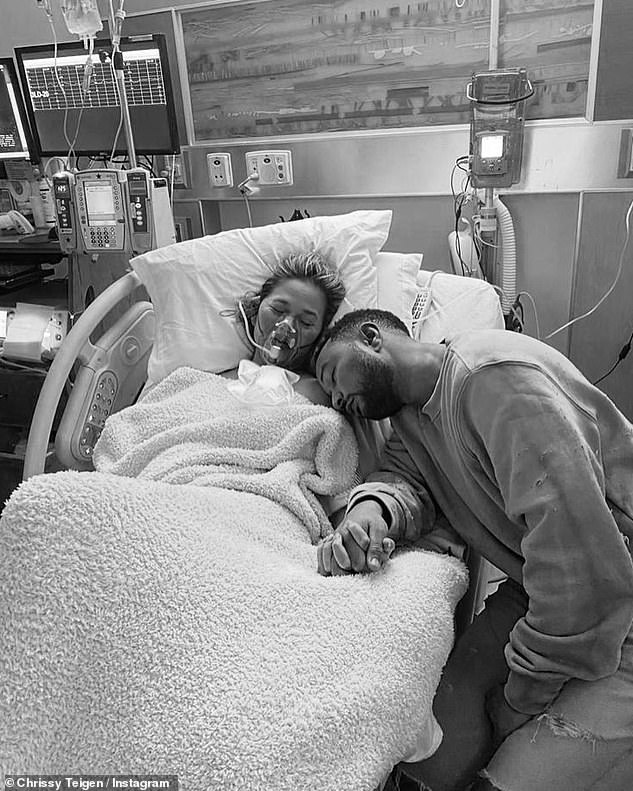 Help: Chrissy recently hit out at critics of the photos, insisting that they were only ever intended to provide comfort to others who have experienced a similar loss

While John again admitted he was ‘worried’ about documenting such an agonising moment, he praised his wife’s ‘courage’, noting that their decision to speak out so publicly ‘meant so much to so many people’.

‘I didn’t know that we could experience this grief and also share it, but when we did, it really meant so much to so many people and it was such a powerful experience for me to learn that, and I’m just grateful that my wife was courageous enough to do it,’ John explained in an interview with Good Morning Americas Michael Strahan.

‘I was worried, I was like, I don’t want to commemorate this pain. But the crazy thing about having a miscarriage is you don’t walk away with anything, you have this emptiness, and we wanted to take the photos so we had something to remember him by.’

Chrissy hit out at critics of the photos, insisting that she ‘doesn’t care’ about anyone who was ‘offended or disgusted’ by them because they were only ever intended to provide comfort to others who have experienced a similar loss. 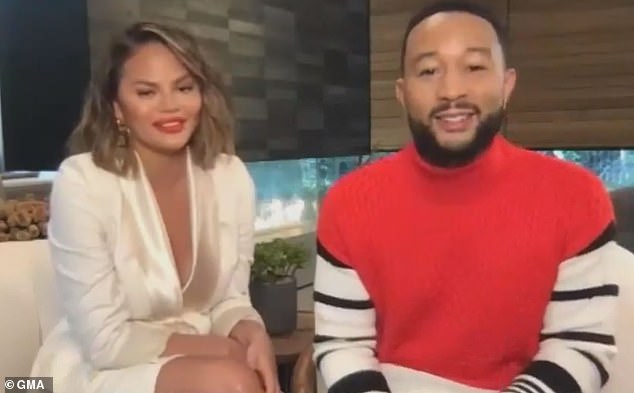 Coming together: The couple said that the support and love of their fans helped them to get through the heartbreaking experience – which has also strengthened their bond as a family

‘I don’t care if you were offended or disgusted. I understand it could be that way for people, [but] it’s designed for the people that were hurting,’ she said, despite noting that ‘John was very uncomfortable taking them’.

Although Chrissy says she is still experiencing ‘complete and utter grief’ in the wake of Jack’s death, she praised all of the people who have shared words of support and love, revealing that she has been sent ‘thousands of letters’ from fans since her miscarriage.

‘I have thousands of letters written to me, and obviously it’s so painful to go through something like this as a woman, something that was inside your body that you were nurturing and taking care of, but obviously there’s a father involved and the support for the both of us has just been so beautiful, so incredible.’

She added that the experience has helped to renew her faith in people’s kindness, enabling her to see that ‘the world is inherently good’. 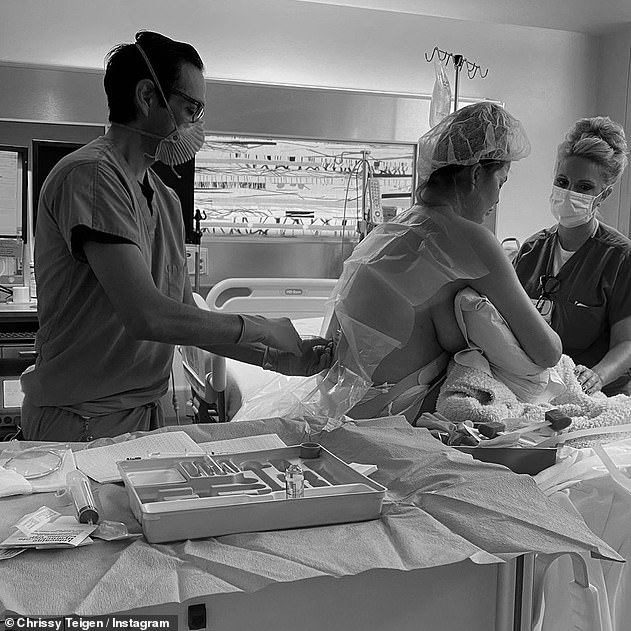 In memory: John took many of the images shared in their social media posts, one of which shows Chrissy sobbing while sitting in her hospital bed

The heart-wrenching experience has also helped to bring the couple – who married in 2013 – closer together, as well as helping to strengthen their bond with their two children.

‘I just know that I love my wife more than ever,’ John said. ‘We’ve been through so many challenges together and they’ve made us strong, and I know that doesn’t always happen when people go through tragedy.

In the wake of their devastating loss, Chrissy and John have now partnered with Ronald McDonald House Charities, an initiative that works with families who have sick children, ensuring that they can remain together throughout treatment without having to worry about astronomical medical bills. 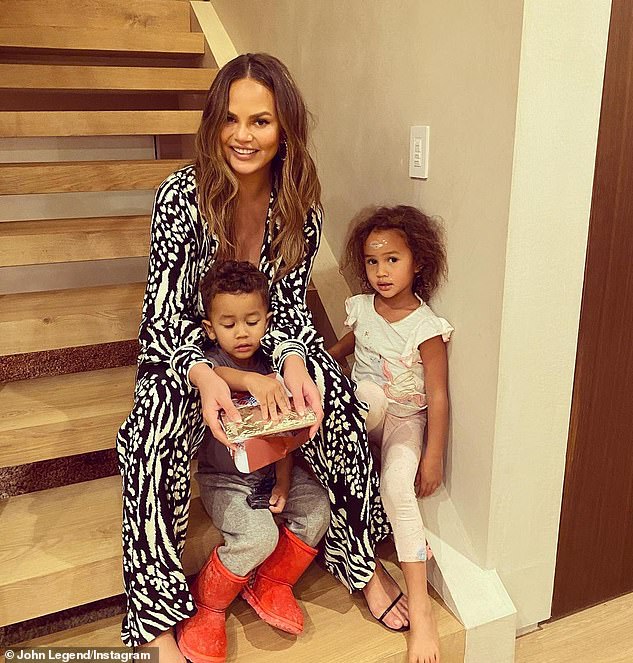 Parents: John and Chrissy are the proud parents of daughter, Luna, four, and son Miles, two