She is the popular This Morning presenter who never fails to bring the laughter during celebrity interviews.

But Alison Hammond was left cringing as she suffered an embarrassing Christmas blunder during an interview with Dolly Parton on Monday.

Alison, 45, was seen looking delighted at the start of the interview with the music legend, 74, conducted via video link from the pair’s respective living rooms. 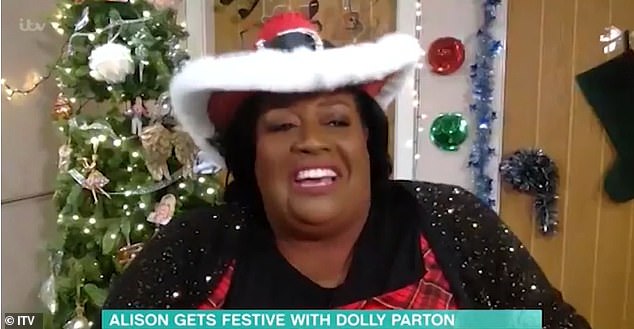 Awkward: Alison Hammond was left cringing as she suffered an embarrassing Christmas blunder during an interview with Dolly Parton on Monday’s This Morning

But all went wrong when Alison attempted to show Dolly some Christmas presents – with a bauble smashing onto the floor.

She said: ‘This interview has been going to well, what could possibly go wrong?’ before adding: ‘I’ve got a present for you that’s going to be coming on its way.’

As she held up a sack of gifts, a smash was heard, with an awkward Alison calling out: ‘It’s just broken, I’m sorry!’ with the camera showing broken glass on the floor.

An amused Dolly said: ‘You busted your bauble! I hope I don’t bust one of mine. 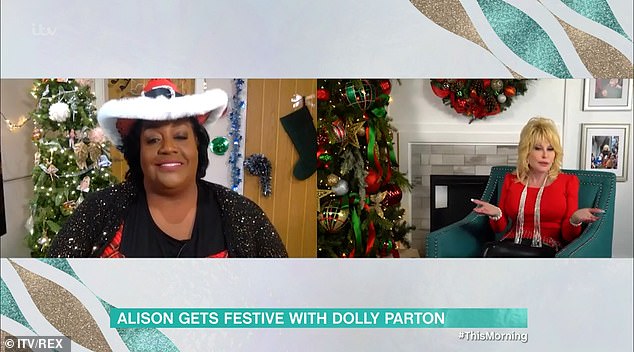 Icon: Alison, 45, was seen looking delighted at the start of the interview with the music legend, 74, conducted via video link from the pair’s respective living rooms

Earlier on the interview, Alison was seen joking with Dolly, saying: ‘Dollywood or Dolly wouldn’t run for President?’

Alison then presented the star with a tattoo sleeve and nail protectors, with Dolly gifting her a book and new album.

The interview comes as the presenter is said to be struggling to cope with the ‘vitriol’ she has been receiving online following the new she is replacing Eamonn Holmes and Ruth Langsford. 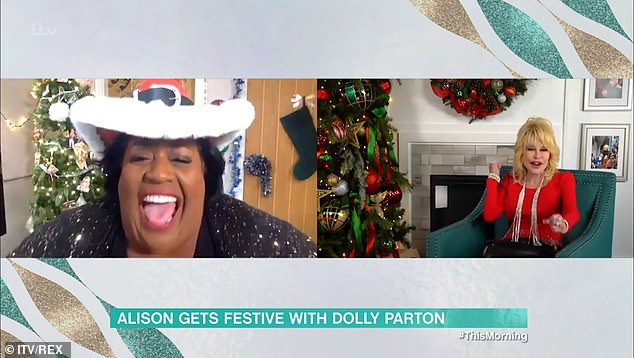 Oh dear: But all went wrong when Alison attempted to show Dolly some Christmas presents – with a bauble smashing onto the floor

Alison is said to be having duty of care meetings after racist trolling over her new This Morning role.

The meetings come after previous criticism of ITV of its after-care, after cases involving the Love Island and Jeremy Kyle shows.

Comments seen by MailOnline have been sent to Alison since it was announced she and Dermot O’Leary would be taking over Eamonn and Ruth’s traditional Friday slot.

As well as racist abuse, there were also unfounded messages about whether she is at the same standard as the presenters whose role she is taking. 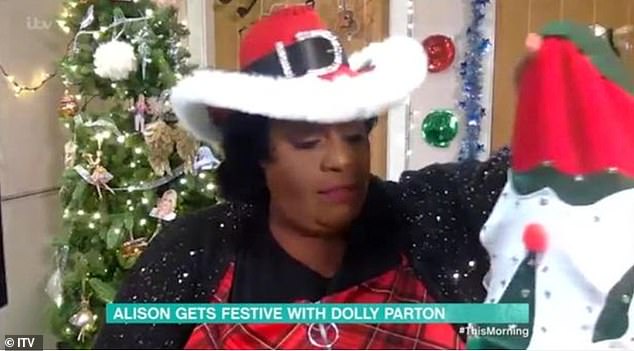 Oh no: As she held up a sack of gifts, a smash was heard, with an awkward Alison calling out: ‘It’s just broken, I’m sorry!’

ITV is extremely cautious about mental health matters following a slew of tragedies of guests or hosts of some of its most popular shows.

The channel’s former hit The Jeremy Kyle Show was also taken off air permanently after a guest on the show is believed to have taken his own life.

It is understood duty of care meetings – like the one Alison had – are not unusual for the broadcaster’s slate of programmes. It is not known if Dermot, Eamonn or Ruth were offered them. 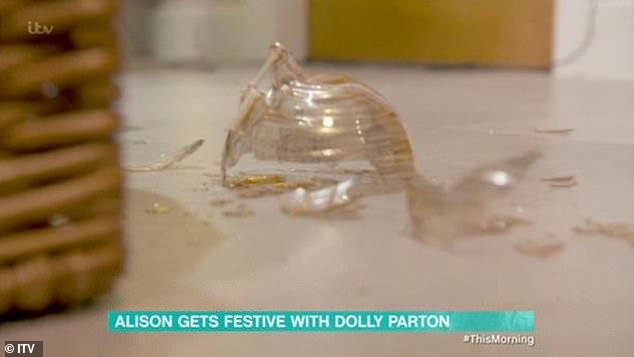 Aftermath: The camera panned to show a shattered glass bauble on the floor

It said: ‘We want to ensure that working at, or with, ITV, is a happy, safe and productive work environment and will strive to review and improve our systems and processes.’

Insiders told The Sun: ‘Alison is a tough cookie, but the vitriol from some so-called fans of This Morning has been impossible for her to ignore.

‘As a result of Love Island and Jeremy Kyle tragedies, ITV are very serious about duty of care and arranged to sit down with Alison to see how she was. Alison confided that while the Friday gig is a dream come true, staying positive is a battle.

‘She was given advice on how to stay strong mentally and prepared for what to expect after the announcement was confirmed. Now Alison is determined to move on from the drama and prove to everyone why she deserved this job.’

MailOnline has contacted representatives for ITV and Alison for comment. 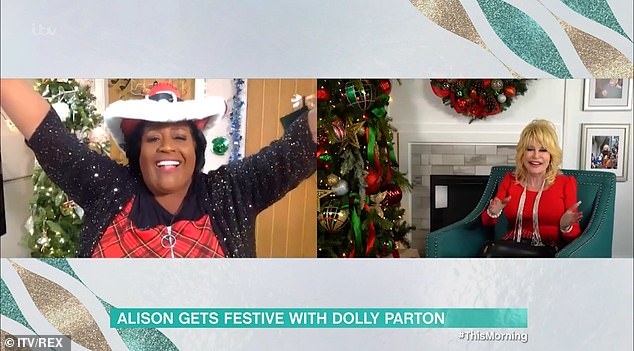 Yay: Alison then presented the star with a tattoo sleeve and nail protectors, with Dolly gifting her a book and new album

On Monday, the replacement was officially confirmed, with an announcement revealing that 60-year-old show veterans Eamonn and Ruth – who have presented This Morning for 14 years – will be demoted to hosting the ITV favourite during holidays.

The incoming presenters will begin their new coveted jobs on January 8th, joining a lineup that also includes main hosts Phillip, 58, and Holly, 39.

Breaking her silence on the shake-up following weeks of speculation, Alison, 45, said in a statement: ‘I never dreamt that when I first joined This Morning – initially for a few months – that I would still be there 19 years later.

‘I genuinely care about the show and the viewers who watch, so it’s a huge privilege and honour to be hosting a show I adore so much. I’m just really excited to be doing even more of what I love alongside the lovely Dermot.’

Sharing his own statement, co-host Dermot, 47, said: ‘I’m deeply thrilled and honoured to be joining the This Morning team next year. We have huge shoes to fill and we are well aware what a privilege it is to be stepping into them.

‘Above all, we want to have fun and for you to be able to kick your weekend off with a smile, especially given the year we’ve all had.’

In an interview conducted before the shakeup was revealed, Alison claimed that only main hosts Holly and Phillip Schofield are off-camera pals.

The TV personality, who attended Ruth and Eamonn’s 2010 wedding, told The Sun: ‘We’re not on top of each other, do you know what I mean?

‘Phillip and Holly, they go on holiday together. They genuinely love each other, in a brother and sister way.

‘But literally when we finish everyone wants to go home to their families and see them. We’ve got it just right I think. But no they all go and do their own thing.’ 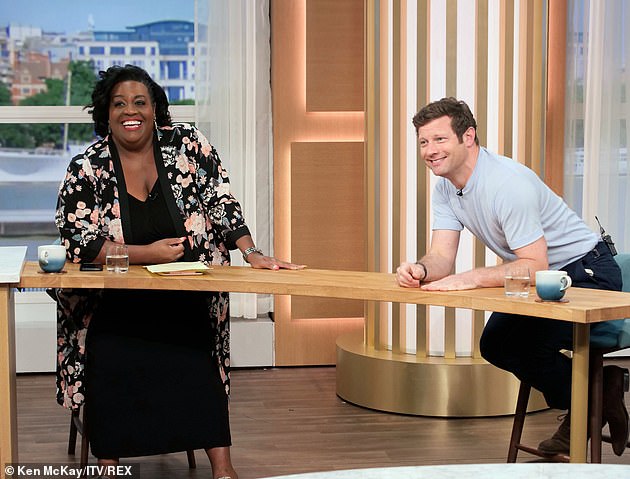 Confirmed: Alison and Dermot O’Leary are replacing Eamonn Holmes and Ruth Langsford as Friday hosts on This Morning